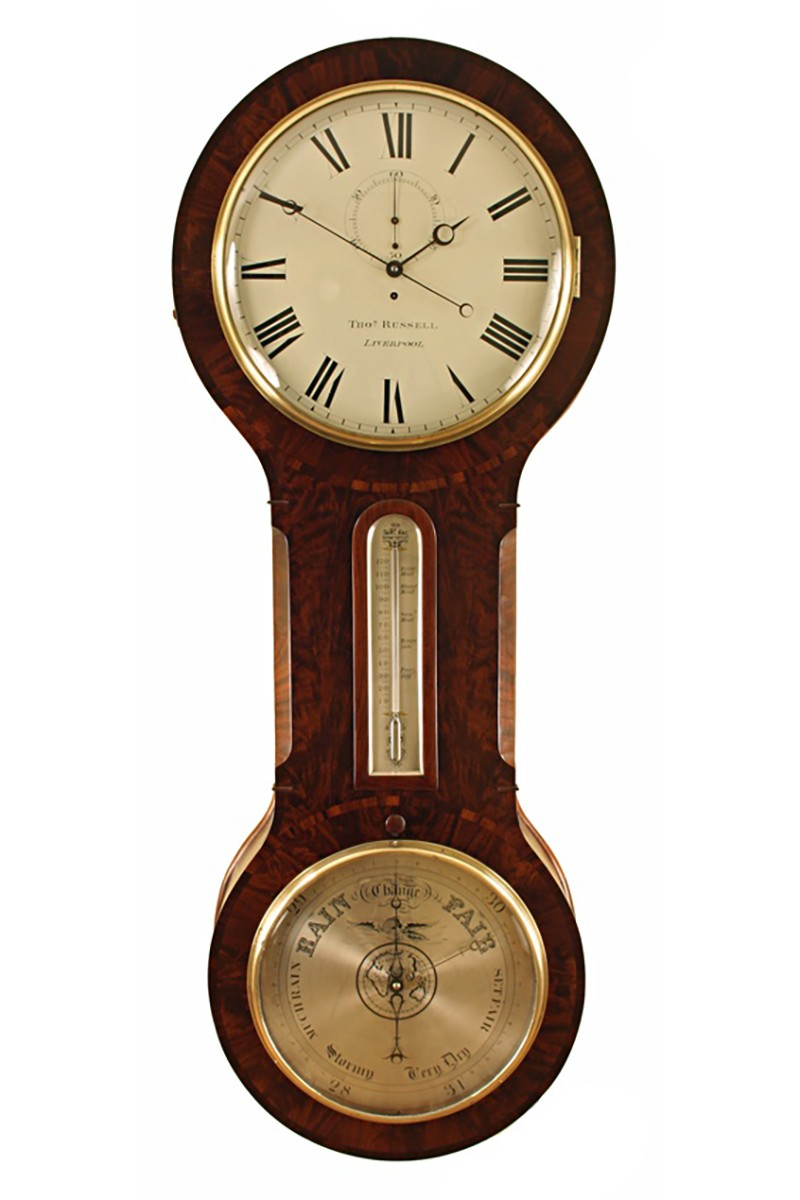 Rare Clock/Barometer by Russell of Liverpool

An impressive, rare and possibly unique clock/barometer by this maker to the Royal family.

The 14" diameter silvered brass barometer dial calibrated from 28" to 31", engraved with typical weather indications and featuring an engraved depiction of the world and above an eagle holding a serpent.  All enclosed within a substantial glazed convex bezel and with a matching blued indicator hand and brass set hand.  The main trunk of the case features a large thermometer scale enclosed within a glazed box and calibrated from 10 to 120 degrees Fahrenheit. Above this we have a 16" painted clock dial with Roman numerals, signed by the maker, Thomas Russell of Liverpool and with matching blued steel hands and seconds.  The single fusee movement is of a high Regulator quality with deadbeat escapement, maintaining power and a large brass bobbed pendulum with a wooden rod.

The extremely finely figured and impressive mahogany case with extensive cross banding throughout, boxwood side inlay and access doors to the side of the clock movement, the rear of the case  and to the very base for pendulum regulation adjustment.

Note: Thomas Russell of Liverpool was apprenticed to William Wakefield in Broughton on Furness and moved to Liverpool in the early part of the 19th century. He worked alongside his son, also Thomas Russell in his later years and died in 1830.The company received several Royal Warrants and specialised in unusual clocks, watches and chronometers. Signing their watches with ‘Makers to Queen Victoria.

Finding a clock and a barometer of such size being used together is rare and due to its impressive nature it may have been specifically ordered for a public place.  With the Liverpool connection combined with the engraved depiction of the world on the barometer dial its possible it may have originally been ordered by a Shipping company based in Liverpool.